The Sandra Day O’Connor College of Law at Arizona State University will celebrate its class of 2021 in May through virtual and smaller in-person gatherings with highlights including remarks from Van Jones, CNN host, and Arizona Secretary of State Katie Hobbs, an ASU master’s degree alumna.

In a virtual ceremony on May 3, Jones and Hobbs will join ASU Law Dean Douglas Sylvester and student convocation speakers in video remarks honoring the more than 450 ASU Law graduates earning a Juris Doctor (JD), Master of Legal Studies (MLS), Master of Sports Law and Business (MSLB), or Master of Law (LLM) degree. ASU Law graduates receiving the highest honor in their respective degree programs will also serve as the student speakers for the spring 2021 event.

Students then have the opportunity on May 12 to gather in smaller, in-person groups with their classmates for ASU Law’s Graduation Viewing Celebration at the Beus Center for Law and Society. This special event for only graduating students will be hosted by Dean Sylvester and law faculty, and recognize student award recipients including the John S. Armstrong Award, Mary M. Schroeder Public Interest Prize, Strouse Prize, Justice Sandra Day O’Connor Award, Rodney K. Smith Founders Award, Outstanding MLS Graduate and many others. 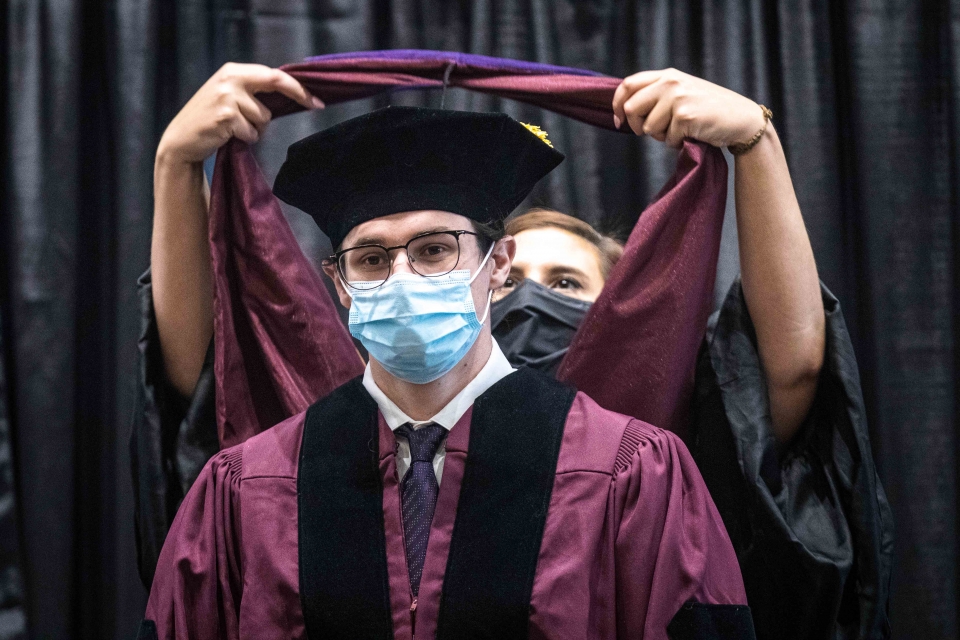 Jens Camp gets hooded for his JD by Loni Burnette, senior director of academic services, as ASU Law graduates take the opportunity to have video and photos taken being hooded in the Beus Center for Law and Society. The video will be shown during ASU Law’s convocation in May, as part of virtual and in-person ceremonies. Photo by Charlie Leight/Arizona State University

Jones is the founder of Dream Corps, a social entrepreneur, a CNN political commentator, an Emmy Award-winning producer and a New York Times best-selling author. Dream Corps is an organization that brings people together to solve America’s toughest problems. Its major initiatives are: Dream Corps TECH, aimed to help 100,000 young women and men from underrepresented backgrounds find success in the tech sector; Dream Corps JUSTICE, an initiative focused on making communities safer while reducing the number of people in our prisons and jails; and Green For All, which advances environmental solutions that prioritize families and workers living on the front lines of some of the worst pollution in America.

A Yale-educated attorney, Jones is the author of three New York Times best-selling books – "The Green Collar Economy" (2008), "Rebuild the Dream" (2012) and "Beyond the Messy Truth" (2017). He was the main advocate for the Green Jobs Act, signed into law by former President George W. Bush in 2007. It was the first piece of federal legislation to codify the term “green jobs.” During former President Barack Obama’s administration, the legislation resulted in $500 million in national funding for green jobs training.

“What matters is … how strong is your springboard, and how hard do you hit it,” Jones said in a preview of his convocation remarks. “That determines your altitude. That determines how far you can go. And you have in your law school a very strong springboard. You’ve got a springboard of people who are committed to helping you find the job of your dreams, to think about how you can have a career of consequence. Everybody doesn’t have that.”

In 2009, Jones worked as the green jobs adviser to Obama. In this role, Jones helped to lead the interagency process that oversaw the multibillion-dollar investment in skills training and jobs development within the environmental and green energy sectors. Together with #cut50, Van also succeeded in passing the FIRST STEP Act, a bipartisan federal bill that the New York Times calls the most substantial breakthrough in criminal justice in a generation.

Jones has been honored with numerous awards and spotlighted on several lists of high achievers, including the World Economic Forum’s “Young Global Leader” designation; Rolling Stone’s 2012 “12 Leaders Who Get Things Done;” TIME’s 2009 “100 Most Influential People in The World;” and the Root's 2014 "The Root 100." In 2017, Jones signed a management deal with Roc Nation, becoming the first political commentator and activist in their family.

Hobbs started her life of service as a volunteer at her church and continued with her job as a social worker and chief compliance officer at one of the largest domestic violence centers in the U.S.

Her focus on helping others to gain security, be heard and create better lives was the fundamental motivation that inspired her to run for secretary of state of Arizona, after serving in the Arizona House of Representatives and Arizona Senate as minority leader. As secretary of state since 2019, she brings her years of experience to that office to ensure it runs productively, and that Arizona elections are secure, fair and efficient.

She has been honored with dozens of awards for her service. Most recently, she was named the League of Cities and Towns Legislative Champion for two consecutive years (2017 and 2018).

For more information and to watch the ASU Law convocation ceremony visit law.asu.edu/convocation.